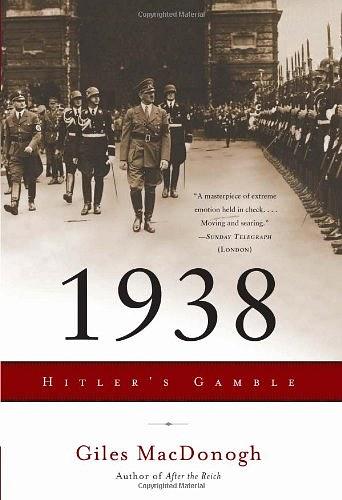 Might-have-beens haunt this insightful narrative of a watershed in the history of Nazi Germany. MacDonogh (After the Reich) chronicles milestones in the development of a radicalized, expansionist Third Reich in the year 1938: the forcible annexation of Austria and the Sudetenland, the Kristallnacht pogrom and the purging of opposition figures in the government, army and church. He portrays these events not as an unfolding master plan but as a series of gambles by a sometimes chaotic Nazi regime plagued by infighting among Hitler's satraps, Wehrmacht coup plots, a collapsing economy (the Anschluss was motivated partly by a need to plunder Austria's treasury and raw materials), and jitters about foreign reaction. The Führer perseveres with theatrical bullying and nervy improvisations that are matched by the Western powers' appeasement; a tragic theme of MacDonogh's story is how easily a determined resistance, from within Germany or without, might have derailed Hitler's initiatives. Another is the callousness of the international community; much of the book follows the travails of Jews who faced closed doors when the Reich was eager to expel them. This well-researched, fine-grained study sketches the moral rot that made possible Hitler's rise. Photos.